Mom straightened the newspapers on the coffee table, picked up my brother’s two sweat socks and his blue Highland Groveland baseball shirt, and moved the armchair back into place. “A sin? Well, it’s when you do something you know you shouldn’t do and you know that God won’t like it.”

She picked up her coffee cup and saucer, and walked into the kitchen with me trailing behind. I was home sick from school, and bored. I’d begun to ponder what my teacher, Sister Dorothy at St. Gregory’s, had taught our class about sinning over the past week. My younger sister was napping, and my five older siblings weren’t home from school yet. I had Mom all to myself, which offered a per­fect opportunity for questions.

“Is it doing something the Ten Commandments say you shouldn’t do?” Sister Dorothy was teaching us about these as well.

“Yes, but it’s more than that. You have to know it’s wrong, too.” She started loading the dishwasher.

“Is swearing a sin?” I’d always been intrigued by words—words that my older brothers were told not to say even more so.

“Well, swearing is something your dad and I don’t like, but I’m not sure exactly how God views it.”

“I wouldn’t recommend it,” she said, finally rinsing a plate.

“When do you know something is wrong?” I asked. “I mean really know, and what happens when you do sin?”

She sighed, but answered, “The church teaches us that age seven is the age of reason, the age when you fully understand right from wrong.” She added the last of the dishes to the dishwasher, sprinkled in soap, closed the door, and turned it on. Then she sat down to make out her grocery list for Red Owl in Highland Village, one of my favorite places to go with her. “When we sin, we go to confession and say we’ll try not to sin again. That’s what Father Moran and Mrs. Hurley are preparing you for now so that next year, you’ll make your First Confession and First Communion. Is that where all these questions are coming from?”

I thought of a number of “wrong” things I could do, but swearing was what I really wanted to do without fear of eternal repercussions.

I tiptoed into my brother’s bedroom, where my four-year-old sister was sleeping. I turned on the vacuum that Mom had left there earlier. My little sister instantly began to wail, as I knew she would. Then, just as suddenly, I began to swear, saying every bad word I’d heard my brothers say. She stopped crying, stunned at my language, which she didn’t understand but certainly knew was bad from the reprimands my brothers had received for them in the past.

Before she could race out of the room to tell Mom, I blocked the door and said, “It’s okay. I’m not sinning. I have three months to go. Try it. You have three whole years.” 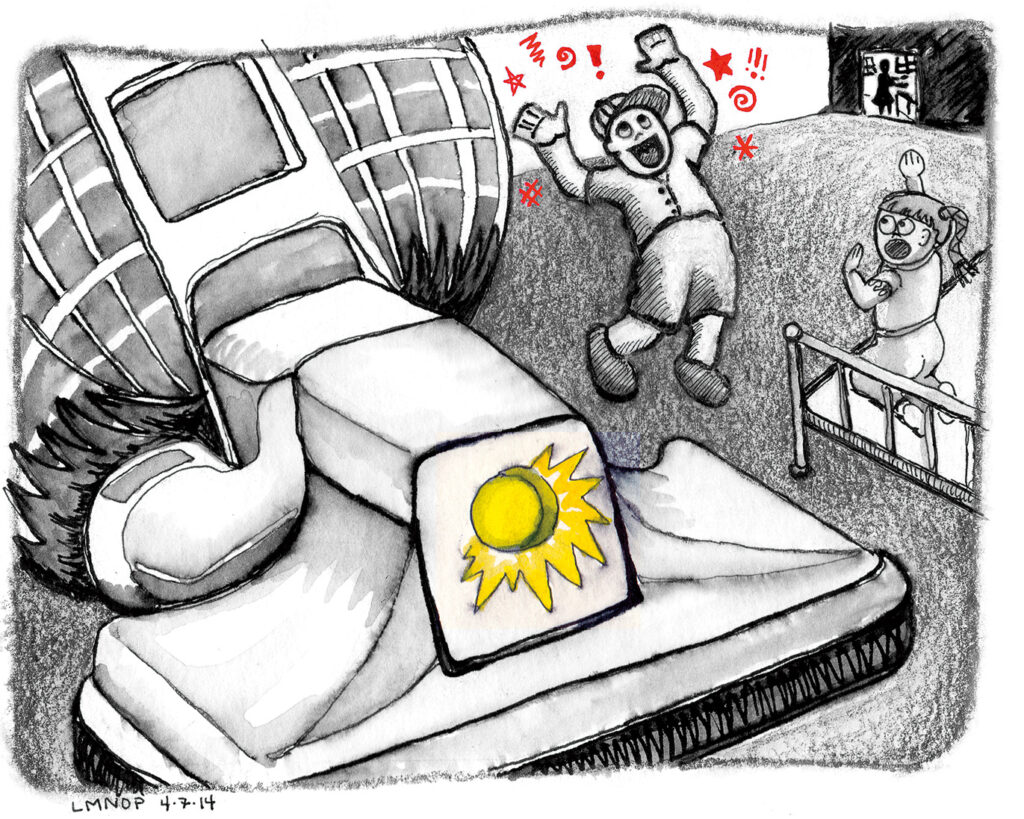 Beth L. Voigt Whether keeping track of her beloved baseball team’s progress in her middle school diary or reflecting on family life in her essays today, Beth has always had a passion for writing. Growing up in Saint Paul in a family of two hard-working parents, nine fun-loving siblings, and numerous friends and relatives who came for an afternoon visit or stayed for a few years, she has much to write about—always. She has published her work in national and local publications, including two editions of the Saint Paul Almanac.

Lisa-Marie Greenly (LMNOP), a Saint Paul illustrator, can usually be found working on several bodies of work concurrently, oftentimes combining themes or media among them, frequently reworking an image in several forms to explore new ways to view a concept. Fluent in watercolor and penwork. www.facebook.com/LMNOP.art