SAINT PAUL IS MY HOME. I am made of the water and air of this place. I am accustomed to the short urban horizon, to the slant of sun that never quite reaches the top of the sky. In the morning, I expect the incessant conversa­tion of sparrows, the cheer of robins, and the occasional resonant call of a cardinal, threaded with the sound of traffic from the freeway, cars passing on the street in front of our house, airplanes crossing to and from the air­port in the south. The smell of roasting coffee comes on an eastern breeze on some days; on others, the sound of bagpipes or drums. Lilacs bloom in May, purple and fragrant. Maples and sumac flame the riverbanks in Octo­ber. This is how I expect the world to be.

The house we live in—husband, son, and I—was once my grandparents’, my dad’s folks. I only went there a few times when I was a child. Elm trees grew on the boulevards, arching over the street, creating a tunnel of shade and coolness in the summer. In my memory, the house is dark, shadowy, lined with the leggy plants my grandfather tended, the room’s focal point the aquarium where angelfish watched me with glassy eyes. The stairs were steep, and in the winter, a curtain hung at the landing to keep the warm air in the living area downstairs. I wished the bannister was longer, and didn’t have the large wooden, head-sized ball at the end, so I could try sliding down it.

Sometime in the seventies, the elms were cut down to contain the spread of Dutch Elm disease, and skinny ash saplings took their place.

Now, every Sunday evening, we have family dinner at the heavy mahog­any table that used to be my grandparents’, and often, our five kids, with partners and children, and my dad, join us. Dad says Grandma would be pleased that her house is full of children.

This has been our house for thirty-three years. I’ve never lived more than nine miles from here. This is where we’ve raised five children, and five gen­erations of our family have lived within these walls—one daughter, with her daughter, stayed with us for a year. Despite this, sometimes I have felt I don’t belong here.

As much as I am shaped by landscape, I am shaped by history, mine and my family’s. My grandparents came here from Minidoka, where they’d been interned during World War II. They couldn’t purchase the house because they were not citizens, but they couldn’t become citizens because they were Japanese. The neighborhood kids yelled “monkey face” at my grandma. Dad and Mom, when looking for their first apartment, followed many phone calls confirming open rooms, only to be told, when they arrived, that the rooms had been filled.

I never became accustomed to the question Where are you from, nor to the fact that Saint Paul was never a satisfactory answer, nor to knowing My grandparents came from Japan were the only words that would stop the interrogation. This question marked me as an outsider, as someone who didn’t belong.

Books that acknowledged the realities of race and gender opened up a world that included me. As I gained a larger perspective, I also gained the sense that I belong, wherever I am, and where I am is Saint Paul.

And the city is changing. According to the 2010 census, people of color made up nearly 25 percent of the city’s population. As we become more diverse, I feel more settled. It’s been a long time since I’ve been asked where I am from. By staying here, I am insisting that we belong, all of us, here, where we have made homes; here, where we are raising families; here, where my grandparents and my parents decided to make their his­tories and lives.

The ash trees are now threatened by the emerald ash borer, and it is pos­sible that the lovely green shade that shelters our street will disappear. Minneapolis is already proactively removing some ash trees, replacing them with maple, ginkgo, white oak, and aspen. Though some people may regret losing the uniformity of the trees’ arching height, I don’t think I will, and I hope my grandchildren grow up to know the beauty of variety, to appreciate the maple’s leaves glowing in the sun when you walk beneath its branches, the ginkgo with its smooth trunk and fanning leaves, the aspen’s green that goes to gold. I hope they grow up knowing Saint Paul is our home. Knowing we belong here. I think they will. 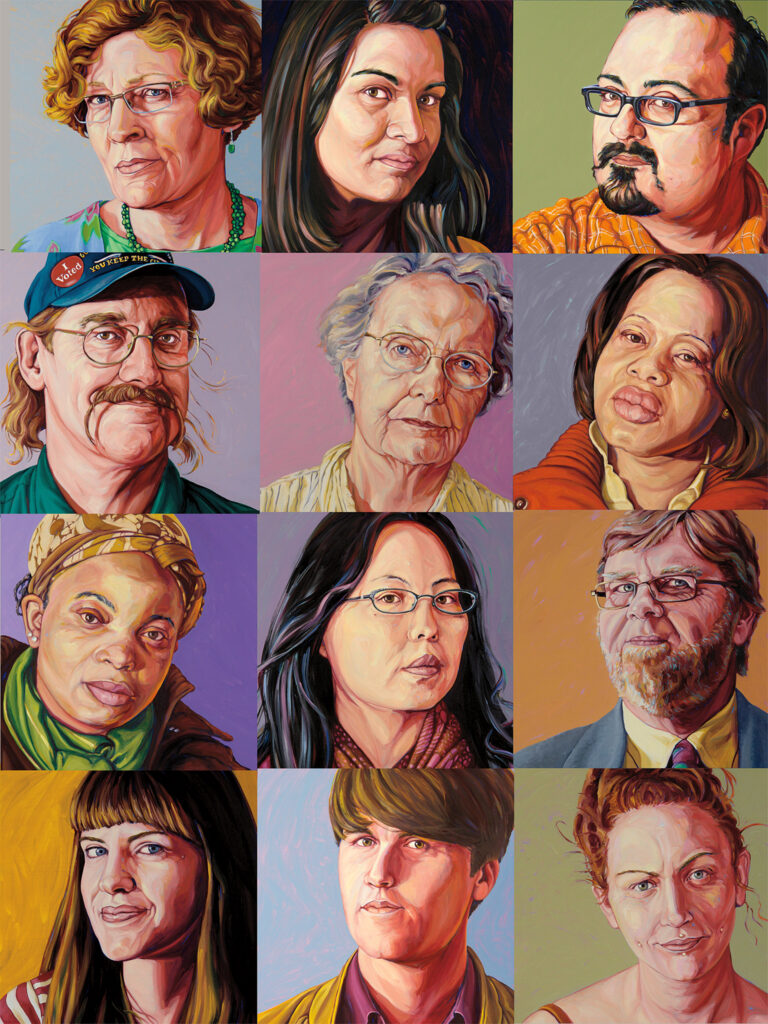 Joan Maeda Trygg would rather tell you about herself through the essays she writes, but, when pressed, will say she is a creative nonfiction writer, bookseller, and grandmother of four. She has published essays in Cheers to Muses: Contemporary Works by Asian American Women and the Journal of the Asian American Renaissance. She has an MFA from Hamline University and is, most adamantly, from Saint Paul.

Patricia Olson was born in Minneapolis and earned a BA in studio art at Macalester College (1973), where she studied with painter Jerry Rudquist. She received an MFA in Visual Studies from the Minneapolis College of Art and Design (1998). She is a founding member of WARM, the Women’s Art Registry of Minnesota (1975).